What happens when your server goes bump in the night?

As an Elixir developer, I get more sleep than most when an issue occurs at 2AM. In my Elixir app, supervisors restart processes when errors occur, keeping my systems available through dropped database connections, exceptions, etc.

When I wake up in the morning, its time to figure out what went wrong, fix the bug, and get back to feature development. Finding the root-cause of issues is hard, especially when the issue is not a simple amendment to an if/else/case expression, but a performance regression in your infrastructure or database. In order to get to the bottom of these problems, we must have a way to understand our running system. We can achieve this by practicing observability and putting the right tools in place.

Observability is simply the ability to observe your running system, with the purpose of understanding its behavior. Forget the three pillars, or anything else you might have read, observability is all about information, tools, and analysis to get to the bottom of your burning questions faster.

If you’re interested in observability, the BEAM, and Elixir, I’m hiring engineers at Bitfo.

You might be in need of improving the observability of your system. Luckily, today we have standards, libraries, and tools available to answer the above questions much faster than before.

Can I get observability with an APM like New Relic, AppSignal, or DataDog?

Yes…and no. Application Performance Monitors (APMs) are a great way to get some observability of your system with little instrumentation. Out of the box, they will give you useful insights such as latency percentiles for each of the routes in your web application. From this metric data, you’ll be able to see when you have a latency or rate spike on a particular route, due to increased traffic, a bug, or some infrastructure level problem. However, these tools only tell you what the problem is, they won’t answer directly why it is happening, which is critical for the step of actually addressing any problems your application may be experiencing.

You want telemetry data at different levels of granularity

What is cardinality and dimensionality?

Dimensionality refers to the number of attributes your data has. Think of of it as the number of columns in your database table. The cardinality of each dimension is the set of possible values in that column.

In order to understand what’s happening in your system, it’s important to be able to see the big picture, and then zoom into various parts of your application to explore and discover regressions and issues. When I think about instrumenting my application with telemetry, I want the following kinds of data coming out of my system

Now collecting all of this data is great, but data is not inherently valuable on its own. It is what you can do with this data that is important. Advocates of observability such as Charity Majors and Ben Sigelman argue that you need high-cardinality in order to debug production systems. To over-simplify, high-cardinality means that we are able to correlate on really specific information, like a user’s unique identifier. Constrast that with low-cardinality data in metrics, where we collapse that information to provide a summary across an aggregate.

If high-cardinality data is requisite for observability, then we need two things:

We can achieve the above with OpenTelemetry and an analysis tool like Lightstep or Honeycomb.

Instrumenting your Elixir app with OpenTelemetry

Let’s instrument a brand new Elixir app with OpenTelemetry. For this guide, I’ll assume you have a Phoenix application using Elixir 1.13 or newer.

First we’ll add the required dependencies into our mix.exs file for producing traces and spans with OpenTelemetry

Is it safe to use rc releases?

You’ll notice a number of OpenTelemetry libraries are in rc, or release-candidate status. Using release candidates carries some inherent risk, but are generally safe to use. They are put in this status to indicate that there are some changes that have not fully stabilized, but they are nearing a major release.

Note opentelemetry_exporter has to be placed first in the dependencies list.

Additionally, you should install instrumentation libraries for any of the popular libraries and frameworks you may be using

Once you run mix deps.get, its time to instrument your application

As we saw above, there are many packages above that can give you great tracing to the libraries you’re already using. These libraries typically work by hooking into telemetry events produced by these libraries and converting them into OpenTelemetry spans. Note that this is a point of confusion for many people, as the telemetry library is an BEAM-specific package for producing telemetry data inside a BEAM application, and is not directly related to OpenTelemetry. However, it is a useful mechanism for libraries, such as opentelemetry_ecto to hook into for producing spans.

To start using these libraries, most simply require calling a setup/1 function in our Application supervision tree.

:telemetry vs OpenTelemetry, what’s the difference?

:telemetry is an Erlang library for providing a language & library agnostic means to produce and hook into telemetry events in a BEAM application. I recommend reading the source code to demystify how it works, its implementation is quite clever. Check the Phoenix Telemetry guide for learning how you can integrate :telemetry events into your application.

OpenTelemetry is a language-agnostic set of tools, APIs, and SDKs for instrumenting, generating, collecting, and exporting telemetry data. Since most libraries produce :telemetry events, libraries such as opentelemetry_phoenix hook into these events and convert them into spans using the Erlang/Elixir OpenTelemetry library.

With distributed tracing, it is recommended to start by tracing the boundaries of your application. As we saw above, we can get spans into many of the entrypoints of our application just by using out-of-the-box libraries. However, there may be internal operations that may need spans, or maybe you want to add additional information to spans that are already being produced, such as adding the user_id to every span in your plug pipeline.

Before we start sending data, we need to add a few configurations to our app

Although observability is important, if it fails it shouldn’t take your app down with it! To ensure this is the case, we need to make sure opentelemetry runs in temporary mode

My application currently runs in fly.io. In the startup script for my Elixir release, I add the following annotations so that every span has information about the server and environment it is executed in. Note that there are more options that you can set, see the OpenTelemetry semantic conventions for the cloud

In dev, we can validate our setup using the standard output exporter. I like to make this optional with an environment variable, so that I can turn off span production via the :otel_tracer_noop tracer when I’m not testing my OpenTelemetry setup.

However, in production we want them to be processed and sent to our tooling of choice, using the otlp protocol

Sending data to Lightstep or Honeycomb

Now its time to send data to an observability vendor for analysis. Honeycomb and Lightstep are both excellent products with generous free tiers for getting started. I am personally partial to Lightstep, and did a case-study with them while at Simplebet. In my opinion, Lightstep makes it a bit easier to get started with features such as their Service Directory. However, both platforms have their strengths and weaknesses, and you cannot go wrong with either.

Sign up for Honeycomb, grab your API key, then

Why choose? Send to both using the otel-collector

Alright Veruca Salt, you want the whole world. Part of the selling points of OpenTelemetry is that it aims to provide a vendor-agnostic means for shipping telemetry data to any vendor. If you have the means, deploying the otel-collector into your infrastructure will allow your application to directly export spans to the collector, and let the collector pick and choose one more more vendors to export spans to.

This means that you can use Honeycomb and Lightstep at the same time, compare and contrast their feature sets, and then choose whom you’d like to upgrade your plan with, if you need to.

Now that you’re producing OpenTelemetry data, you will begin to see latency and error data populate in your Service Directory. This is a great starting point for exploring the operations in your application 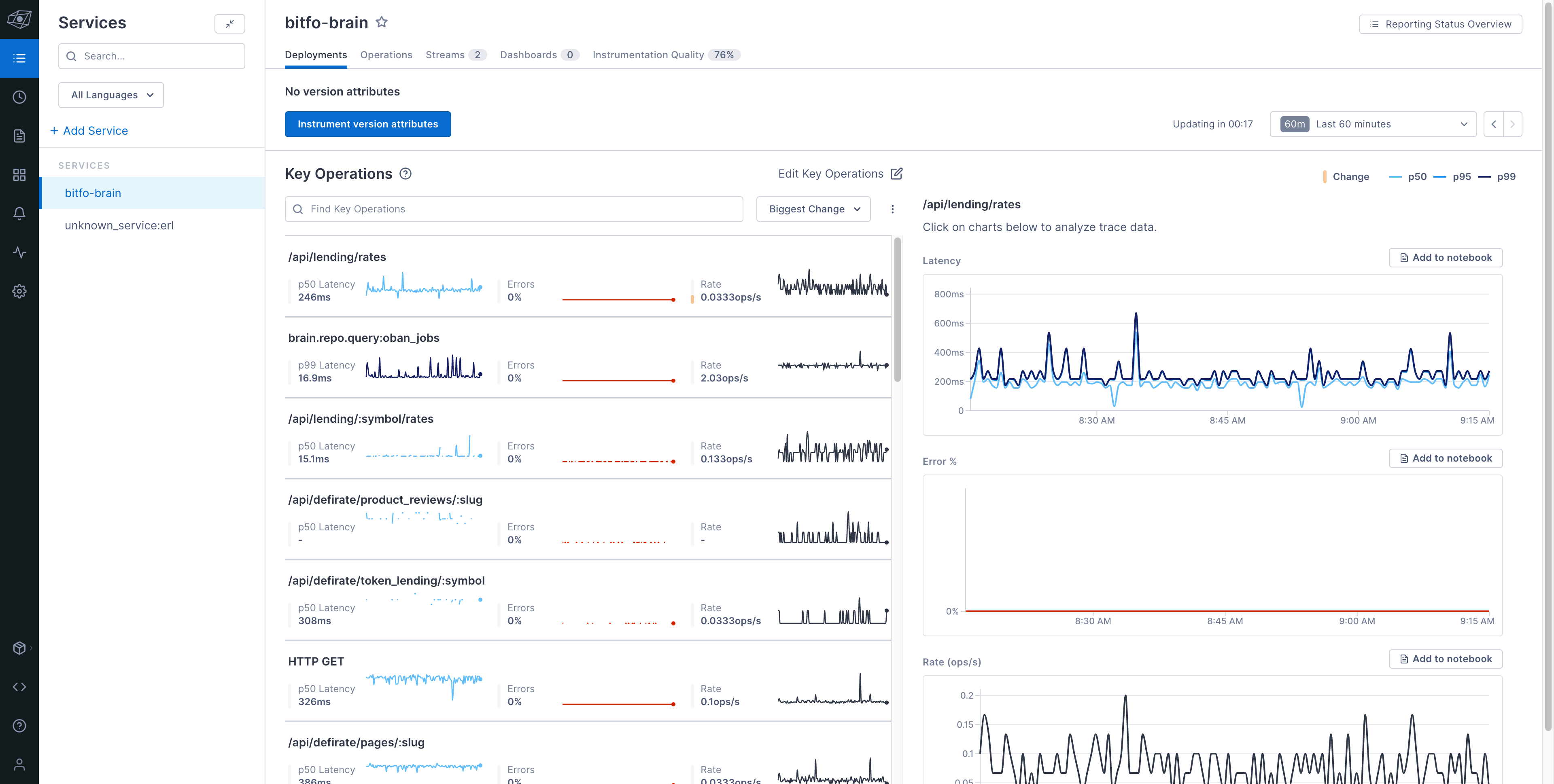 However, the real value of Lightstep is using streams and finding root-causes to issues using their correlation analysis tools. Take a tour of their documentation and learn how to make effective use of their reliability platform.

This is only the tip of the iceberg for getting started with observability. For actually correlating production issues with these tools, please dig into the excellent documentation of Lightstep and Honeycomb for setting up queries, dashboards, alerts, and more.

If you’re interested in getting deeper, the amazing Charity Majors, Liz Fong-Jones, and George Miranda wrote a book called Observability Engineerging: Achieving Production Excellence that promises to go way deeper on the topic of observability.

For Elixir-specific issues, hit me up on Twitter or the fine folks of the Erlang Obserability Working Group. And if you are interested, please consider supporting them or joining their working group, they can always use an extra hand!

Thank you to all those who offered to proofread and fact-check this post. Special thanks to Bernardo Amorim, Herminio Torres, Michael Crumm, Paulo Valente, and Sundi Myint who all provided invaluable feedback to this post.

See a mistake/bug? Edit this article on Github